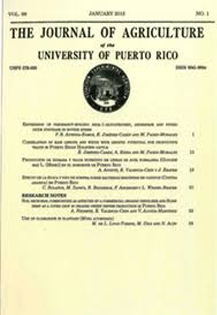 Lettuce is a cool season crop typically grown at high altitudes or during the winter months in tropical climates, but is an important vegetable with potential for increased local production in Puerto Rico. To evaluate year round production potential, eleven lettuce cultivars were grown organically in Lajas under eight environments: winter, spring, summer and fall seasons in 2011 and 2012. All cultivars flowered later in the winter than in other seasons. There was a trend for flowering to be earliest in summer, but in many cultivars bolting occurred equally early in spring or fall. For most cultivars the greatest head weight and harvest yield was observed in the winter or spring season. Fall plantings generally resulted in plants with the smallest heads and lowest yields while summer plantings were intermediate in head weight and yield. ‘Queensland’ was the highest yielder in every season, yielding more than twice the average of all the genotypes in the summer and fall seasons, making it a valuable cultivar for year round production in the tropics. ‘Bergam’s Green’, ‘Jericho’ and ‘Parris Island’ also performed fairly well throughout the year. ‘Black Seeded Simpson’, a locally popular cultivar, performed poorly.