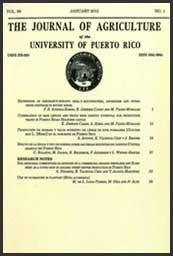 Studies were conducted in the 1950s to evaluate the degree and spatial extent of soil salinity and sodicity in the Lajas Valley in southwestern Puerto Rico. Problem areas were identified and most of these were remediated with the establishment of irrigation and drainage infrastructure, resulting in a four-fold increase in agricultural production over a 10-year period. The area is now an important agricultural region (known as the Lajas Valley Agricultural Reserve). But soil salinity and sodicity are important concerns among farmers. In this paper we used published data and re-created the spatial distribution of soil salinity and sodicity using geostatistical analysis with Geographic Information Systems (GIS). An Ordinary Kriging method was applied to map the spatial distribution of soil salinity and to classify soils in four classes: (i) Normal, (ii) Saline, (iii) Saline-Sodic, and (iv) Sodic. The original hand-drawn maps were digitized using the Georeferencing Tool in ArcGIS, guided by a recent aerial photo of the Lajas Valley. Salinity and sodicity isopleths were created using Surface Generation to map the spatial distribution and to compare the newly created data to the original maps. The relative error in aerial estimate between the old and new maps for Normal, Saline, Saline-Sodic, and Sodic surface soils was between 1 and 5 percent. The new maps developed with geostatistical analysis can predict soil problem areas with a 94% coincidence compared with the hand-drawn maps. The highest proportion of soils classified as Normal was found in the upper soil layers and the proportion of soils affected by salt and sodium increased with depth. The combination of geostatistical analysis and GIS is a cost-effective and trustworthy method for analyzing similar datasets that would otherwise be costly and involve lengthy time commitments.